A 63-year-old Chinese carpenter’s traditional skills have become an Internet sensation as he creates woodwork with nothing more than a single piece of wood, without glue, screws or nails.

Wang Dewen, known as “Grandpa Amu” on YouTube, has been dubbed as the modern day Lu Ban, a revered Chinese structural engineer during the Zhou Dynasty, thanks to his vast carpentry knowledge.

“If you do something, you have to love it, and you have to be interested in it; however, being interested doesn’t mean there’s only happiness and no pain,” Grandpa Amu shared when talking about his excellent carpentry skills. 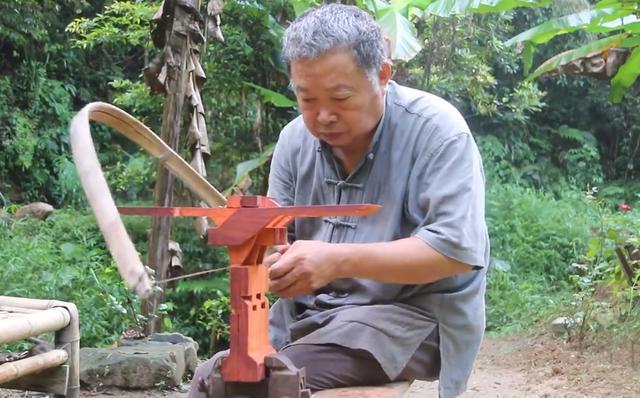 His most popular works include a sophisticated folding stool, a model of the China pavilion from the 2010 Shanghai Expo, and an apple-shaped interlocking puzzle, known as a Lu Ban lock.

Grandpa Amu follows an ancient Chinese mortise and tenon technique, which means no nails or glue are involved in the entire process of building the arch bridge.

The master carpenter has also made several wooden toys for his grandson using the same technique. His young grandson’s favorites include a walking Peppa Pig and a bubble blowing machine.Attracting over 1.17 million subscribers on YouTube, Grandpa Amu’s videos so far have gained more than 200 million views.

His extraordinary woodworking skills, using the same mortise and tenon joints found in the Forbidden City, were developed from the age of thirteen as a means of supporting his family in East China’s Shandong province.

“The grandson is so happy, as there have been so many exquisite and unique toys made by grandpa from an early age,” commented one netizen; while another said “It’s amazing. I hope these traditional crafts can be passed on!”