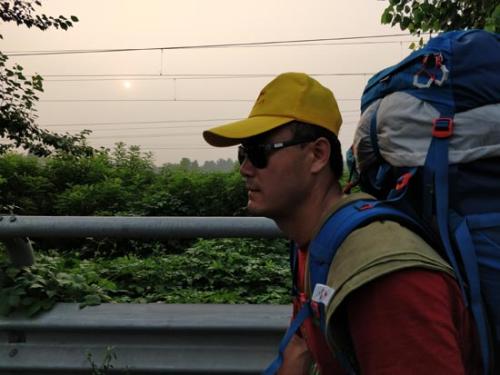 On the 1,100-kilometer journey, the man Cao Shengkang, who lost his eyesight at the age of eight in a car accident, crossed 40 cities and counties in three provinces. His mobile app tracked a total of more than 1.35 million steps.

Inspired by the Belt and Road Forum for International Cooperation held in Beijing this May, Cao decided to cover the route by hiking as a tribute to the ancient Silk Road.

A friend of his, Wu Fan, volunteered to be his companion during the trip, and he helps protect him on the road. The trip was also a way to forge his mentality, Wu added.

Several days after their departure, Cao’s feet blistered. In order to relieve the pain, he walked faster to reduce the amount of contact between his feet and the ground. But he still had to cover 25 kilometers a day.

Sunburn, storms, injuries, and dust were their companions on the trip. Sometimes they even had to go hungry because restaurants were not always available.

During the trip, Cao and Wu also collected garbage along the road, in order to promote environmental protection. Cao believes this good deed will make the hiking trip even more meaningful. The two of them collected more than 1,000 plastic bottles along the 40-day journey.

On Aug. 27, they finally arrived at their destination: Xi’an. “I have proved that it’s possible for blind people to do such a thing,” Cao trembled.

“Though I couldn’t see the scenery along the road, I myself was a unique part of it,” he said.

In the last 5 years, Cao has walked through 34 countries in six continents, and reached the peak of Kilimanjaro, Africa’s highest mountain, in 2016.

Now, Cao has started the second part of his dream to walk along the Belt and Road route. He flew 4,700 kilometers from Xi’an to Kashgar, Xinjiang Uygur Autonomous Region, on Sept. 20, planning to hike back to Xi’an in 5 months.