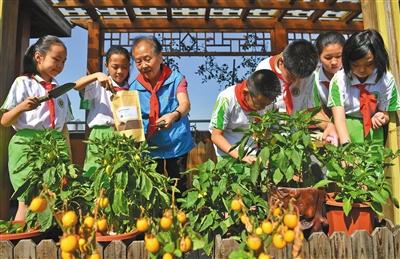 Ju Yueru, a waste sorting volunteer in her seventies, teaches students to fertilize plants with kitchen waste in the ecological garden on the school roof. (Photo/The Beijing News)

On the first day at Dongsijiutiao Primary School, Ju Yueru, a waste sorting volunteer in her seventies, taught students to fertilize plants with kitchen waste in the ecological garden on the school roof.

Using compost made from kitchen waste enriches not only the students’ knowledge about garbage sorting but also benefits the environment, said a school teacher who is undertaking experimental research on kitchen waste.

The cartoon image spokesperson of Beijing garbage classification showed up at the opening ceremony for Dengshikou School. Zhang Zixia, the student who designed the cartoon image, drew her inspiration from an octopus, symbolizing that everyone should lend a hand in sorting waste and protecting the environment.

The school waste-sorting pioneers, together with Yuan Rishe, an environmental volunteer, called on the students, teachers and parents to try to use recyclables, clear their plates to reduce kitchen waste and learn about classification to identify hazardous waste.

Beijing put the law on garbage control into force back in 2012. However, the implementation of trash sorting hasn’t gone well. The city is pushing forward its waste sorting legislation, clarifying an individual’s responsibility to sort domestic waste and imposing punishments for violations of garbage classification regulations.