Over the past five years, Beijing has actively supported northwest China’s Xinjiang Uygur autonomous region with the construction of kindergartens and primary and middle schools, in a bid to lay the foundations of and bolster areas of weakness in Xinjiang’s education.

From 2016 to 2020, Beijing allocated a fund of nearly 2.1 billion ($320 million) yuan to aid Xinjiang in improving schools. The city established, renovated, and expanded a total of 193 kindergartens and primary and middle schools, which cover an area of over 2.6 million square meters, and built a batch of demonstration schools including the Moyu Beijing Senior High School and Hetian Beijing Haidian Primary School in Xinjiang.

Beijing has significantly scaled up the various education infrastructure in Xinjiang and helped the autonomous region resolve the shortage of education facilities overall at this stage.

Meanwhile, Beijing has helped create over 150,000 places in the schools of Xinjiang, effectively guaranteeing the access to education for children who have reached school age.

Raziya Abdirehim, a six-grade student at the Hetian Beijing Haidian Primary School, enjoys rope skipping with friends at the tartan tracks of the schoolyard. “I really like the big playground as we can play games and do activities there,” said the student.

Before it bid farewell to poverty last year, Hotan prefecture in Xinjiang, where the Hetian Beijing Haidian Primary School is located, was one of the severely impoverished areas in China and was faced with a prominent lack of education resources.

For a while, the schools in villages and towns of the prefecture were equipped with rough wooden tables and chairs, whose colors didn’t even match; a teacher needed to take care of an entire class of 50 to 60 children in the kindergartens, which was pretty hard work; and in some schools, the walls fell into decay, and the ceilings of offices had cracks and started to peel.

As a key project of Beijing’s assistance with the education of Xinjiang, the Hetian Beijing Haidian Primary School took shape on an open space within merely over one year and officially started to enroll students in the autumn of 2018. 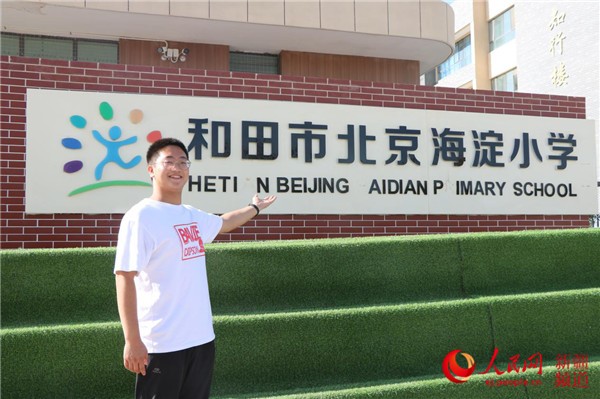 Wei Hengbo, a teacher of the Hetian Beijing Haidian Primary School, northwest China’s Xinjiang Uygur autonomous region, poses for a photo in front of the school. When he was still in college, he already volunteered to teach in Xinjiang. (Photo/People’s Daily Online)

With novel designs and complete facilities, the modern school accommodating over 2,100 students now has become a star school in the area, and serves as an epitome of the fruits Beijing has achieved in assisting Xinjiang in the field of education.

When it started to enroll students, the Hetian Beijing Haidian Primary School was troubled by the lack of experience and professional skills among some local teachers though equipped with first-class hardware facilities.

Liu Quanhua, a teacher from Haidian district of Beijing in the Hetian Beijing Haidian Primary School, has encouraged fellows assigned by Beijing to instruct local teachers, which pushes the rapid improvement in their quality.

It is crucial to train a team of high-quality teachers for the area, and stimulate the vitality of local teachers so that they can independently animate the class and benefit the students, according to Liu, also the first principal of the school. 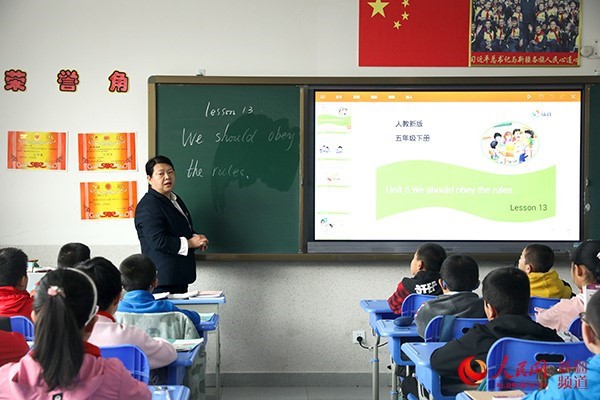 Liu has devoted himself to the development of the school and couldn’t help but shed tears when he attended the flag-raising ceremony at the school for one last time before leaving the school and returning to Beijing last year.

Since 2016, Beijing has assigned 647 excellent teachers in four batches to help teach students in Xinjiang.

The teachers from Beijing have formed over 800 pairs in a master-apprentice relationship with local teachers in Xinjiang to improve their competences, staged demonstration courses for more than 1,500 times, and trained over 10,000 fresh hands in schools.