Automation is turning China’s Port of Qingdao, Shandong Province into an “unmanned terminal”, reducing the pressure on human labor and contributing to high-quality development of the country. Photo taken on Mar.18, 2019 shows the Huangdao oil terminal and Qianwan ore terminal at the Port of Qingdao and the streets in Qingdao West Coast New Area beside the two terminals. (Photo/People’s Daily Online)

A few years ago, when Wang Yang, a young bridge crane operator started his career in the Port of Qingdao, his daily routine was lifting cargos up and down in a bridge crane 40 meters above the ground. He had to lower his head for a dozen hours each day for operation.

What he endured back then was not only the sweats, but also the loneliness in the operation room that covered less than 3 square meters.

“When can we work with our heads up?” That has been a dream for generations of workers like Wang.

Finally, the dream came true for Wang and his colleagues today. Now the Port of Qingdao has established a fully automated container terminal, where the previous bridge crane operators have turned into “remote monitoring personnel”.

The fully automated Qingdao Qianwan Container Terminal is now a “no man’s zone”. From a 60-meter-high crane, it can be seen that autopilot electric vehicles are transporting cargos in an orderly manner, and the hoisting equipment are operating rapidly at the stacking area automatically.

Wang now works at an office building far from the operating area, and he can finally keep his uniform clean in the new working environment. He has transformed from a manual laborer that had to endure harsh working conditions to an employee that works in front of a computer.

Now, the workload that used to need more than 60 people at a traditional port can be completed by only nine. Thanks to the great changes in the port, the blue-collar workers have become the commanders that control the “brain” of the terminal.

The change of the working content reflects the transformation of the production mode.

The development of ports indicates that in the old days, manpower always had to take the most strenuous part of the jobs, be it loaders or mechanical operators.

However, the situation is totally different today. All the procedures are automated at the unmanned port. An average of 33.1 units can be handled each hour, a performance way better than that of a traditional port. 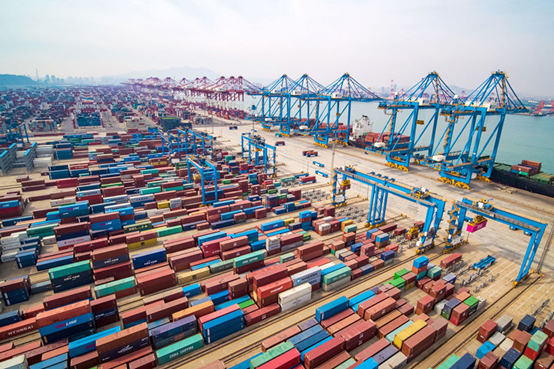 At present, operation instructions are sent by computers, and tasks completed by robots. What the unmanned port relies on are the new technologies such as the Internet of Things (IoT), intelligent control, information management, communications and navigation, big data, and cloud computing.

The practice of the Port of Qingdao has demonstrated that container terminals, though long been regarded as a typical traditional industry, can achieve deep integration with new impetus, new technologies, and new forms of business.

Chinese President Xi Jinping, also general secretary of the Communist Party of China (CPC) Central Committee stressed during his visit to the Tianjin port that the city should aim for the far-off future in its efforts to develop the port into a world-class smart and green port, noting that “a country must enhance its transportation, especially sea transportation, before seeking economic development and improvement in national strength.”

While liberating workers from intense physical work is the direct consequence of an unmanned port, the updates of technologies and the improvement in production mode mean more to the port itself.

From physical work to intelligence, and from manual skills to machinery operation, the port’s path to automation driven by scientific and technological development has contributed solutions to the transition in which traditional drivers are replaced by new ones.

Only by fostering new driving forces and upgrading traditional engines to realize self-revolutionary development, can a world-class smart port be built and high-quality economic development realized.

Hard work is the foundation of development and innovation is crucial. More than 40 patents were applied during the construction of the fully automated container terminal. The engineering has proven that the courage and capability to innovate, and to throw off the shackles of traditional knowledge and position are necessities for seeking development, and it’s clear that in order to pursue development, enterprises need to make courageous breakthroughs so as to overtake their competitors.

In February, the Port of Qingdao was invited to attend the Press Conference for the World’s First 5G Smart Harbour during the 2019 Mobile World Congress (MWC) held in Barcelona, Spain. By sharing and promoting its experiences in technology application and smart harbor development, the port won extensive recognition and praise.

During People’s Daily’s interview at the Port of Qingdao, the smart terminal was also visited by a group of artificial intelligence experts from Germany. It is learned that such foreign technological exchanges have already become a routine for the port.

A slogan in the office building of the port says that “innovation defines the future”, which makes the smart terminal more like a tech firm.

Indeed, the evolving technological advances and innovative ideas are what support the attempt of the port to transform labor-intensive production to one that is driven by science and technology. In addition, they are also the source of the port’s tireless exploration of the future

Seeking new possibilities with innovation and intelligence, one will always find a road leading to a better future.