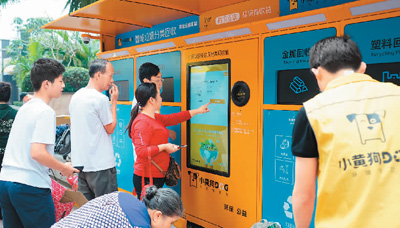 Waste management powered by artificial intelligence (AI) is getting off the ground in China as the country works to build itself into a greener place with more Chinese residents realizing the importance of garbage classification and recycling.

Xiaohuanggou ( which means little yellow dog in English), a company principally engaged in environmental protection, has rolled out more than 10,000 AI-powered waste sorting bins in 33 Chinese cities, gaining over 2.6 million users on its app in less than a year under the support of government policy.

The State Council recently issued a plan to build zero-waste cities which promote the “Internet Plus recycling model” to integrate new technologies with garbage sorting.

The AI-powered garbage sorting bin could automatically identify waste using cameras or the average density and size of items. It also pays users when they recycle metals, plastic and paper boxes.

A user surnamed Li, who lives in Beijing, received an environmental protection fund of 0.25 yuan for simply scanning the QR code and putting her broken pan into a smart waste sorting bin. The money is credited to her Xiaohuanggou account and can be cashed once it exceeds 10 yuan. A worker of Xiaohuanggou operates a machine to compress and pack cardboard recycled. (Photo/Zhang Chuxin)

Besides image identification and real-time payment, the smart waste sorting bins also provide services such as big data, cloud computing, and accurate location, which enable users to trace their waste.

The monitoring system will notify garbage collectors once 80 percent of bin space is used and deliver the waste to the sorting center, where the garbage will be further processed and transferred to factories as renewable resources.

Alipay, the Chinese mobile payment giant, has also gone full speed in this race. It has introduced platforms for garbage sorting into over 30,000 communities in 14 cities in the Yangtze River Delta region.

Statistics show that China produces about 10 billion tons of solid waste every year. It requires the participation of every Chinese citizen to win the battle against pollution.

Li Guoqing, director of the urban and environmental studies department at the Chinese Academy of Social Sciences, said that society needs to raise public awareness for environmental protection instead of just focusing on personal income from recycling.

“We will continue recycling through the ‘Internet Plus’ model and draw more people to join us to contribute to China’s waste management,” said Tang Jun, founder of Xiaohuanggou.