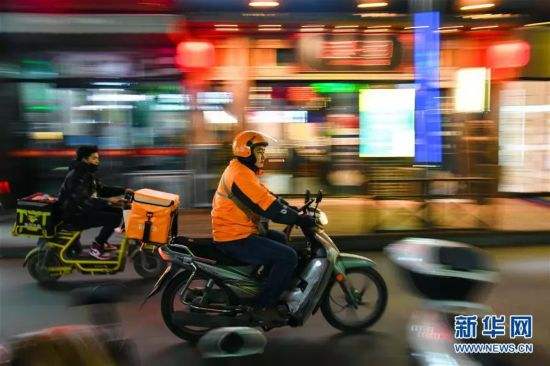 Online food ordering and delivery platforms are now in collaboration with restaurants to produce and deliver meals for seniors, as there is enormous market potential in this age bracket.

About 40 percent of seniors said they need healthy and nourishing meals in a recent survey conducted by the China National Committee on Aging.

According to the National Bureau of Statistics, China was home to 250 million people aged 60 years or above by the end of 2018, indicating the potential for online food ordering and delivery.

To make use of this opportunity, online platforms, such as Ele.me and Meituan, have teamed up with restaurants offering meal services for the elderly community.

Some cities have improved delivery services so that the food is sent to seniors customers in a timely manner.

The takeaway service has won the hearts of some seniors. A resident surnamed Zhang in southwest China’s Chongqing Municipality said that by using her mobile phone, dinner would be delivered to her doorstep in a matter of minutes. Before she had access to these services, it took a lot of work for her to cook a meal while taking care of her husband, who uses a wheelchair.

Despite the growing market, restaurants struggle to make a profit because they sell meals at a relatively low price to attract consumers, and they pay administrative fees to the platform.

Tong Jingsong, a researcher with the China Research Center on Aging, suggested online platforms provide a set of services including food delivery, housekeeping and nursing care to help increase their profits.

Stuttgart launched a project to encourage local merchants to cooperate with Chinese online payment platforms such as Alipay and WeChat Pay. (Photo/People.cn)

In 2018, Stuttgart, a city located in southwest Germany, launched a project to encourage local merchants to cooperate with Chinese online payment platforms such as Alipay and WeChat Pay to help make travel more convenient for Chinese tourists.

So far, 75 merchants in the city have added mobile payment options, including Hotel Altbacher Hof and the CUBE restaurant.

Breuninger, a Stuttgart-based department store retailer, has introduced both Alipay and Wechat Pay to all 11 of its outlets. It’s crucial to adopt a more convenient pattern of payment for Chinese customers, as they account for 50 percent of the store’s foreign customers, explained the brand’s tourism marketing director.

An increasing number of Chinese tourists have visited Stuttgart in recent years. In 2018, the city received about 68,664 overnight Chinese visitors, up from just 10,000 back in 2001. Chinese photovoltaic products saw a growing overseas market in the first half of 2019. The country’s export of photovoltaic products reached $10.61 billion, an increase of 31.7 percent compared with the same period last year. The export volume of battery chips exceeded that of the whole year in 2018.

The European market also showed signs of recovery. Exports of photovoltaic modules from China to major European countries such as the Netherlands, Spain and Ukraine increased significantly.

In the first six months of this year, the country’s production of silicon wafers reached 63 gigawatts, an increase of 26 percent year-on-year. The production of solar cells stood at 51 gigawatts, up 30.8 percent.

Bloomberg New Energy Finance, a research organization that provides insight and news about the energy sector, predicted that the global demand for photovoltaic products is expected to reach 123 gigawatts to 149 gigawatts this year.

The prevalence of severe eyesight problems is alarming, with 21.9 percent of high school students wearing glasses stronger than six diopters.

Excessive homework, insufficient outdoor exercise, and abuse or improper use of electronic devices are thought to be the major causes of myopia among Chinese children and teenagers.

The country has intensified efforts to prevent and combat nearsightedness among teenagers. It plans to reduce the overall myopia rate among teenagers by more than 0.5 percentage points per year from 2019 to 2030, according to a recently released health guideline.

The guideline requires schools to guarantee that students exercise for at least an hour a day at school, perform eye exercises regularly and read and write for no more than 40 minutes without a break both in the classroom and at home.

The Ministry of Education calls on parents to reduce the time their children spend using electronic devices to within one hour per day.

Chinese animations have adopted traditional cultural elements and attracted global attention thanks to their unique style.

Animators have combined traditional culture with animation since 1956, when Te Wei, then director of Shanghai Animation Film Studio, proposed that domestic animations should integrate national characteristics.

Wan Guchan, a veteran animator, applied the art of paper-cutting to create the cartoon “Pigsy Eats Watermelon” in 1958, the first of its kind in the country.

The animators created many excellent movies, many of which even won a reputation in the global market. The ink-wash cartoon “Feeling from Mountain and Water” received five major awards including Best Short Film at the 14th Montreal International Film Festival of Canada in 1990.

China’s animation industry has developed rapidly since the 1980s as the country furthered cooperation with international cartoon corporations. In 1985, the first Chinese-foreign joint venture that produced cartoons was established in China. Within the following eight or nine years, nearly 100 cartoon enterprises came into being. The booming industry stimulated the production of cartoons. In 2010, 220,000 minutes of animation were produced, making China the world’s biggest producer of TV cartoons.

In recent years, China has held cartoon exhibitions around the world to bring domestic works to the global market. This year, the country exhibited more than 130 animated cartoons in Japan to showcase the progress of China’s animation industry.