A report by Chinese travel services provider Ctrip showed that Chinese tourists have left their footprints on more than 1,000 cities in nearly 100 countries during the 7-day National Day vacation.

The report, issued on Oct. 8, indicated that Thailand ranked the hottest tourist destination for Chinese in this year’s vacation, followed by Japan, Chinese Hong Kong, Vietnam, and Singapore.

According to previous data released by related Thai department, a total of 7.73 million Chinese tourists visited Thailand in the first 8 months of 2018, growing 16.51 percent year on year. They created tourism revenue of 90.1 billion yuan ($13 billion) for the Thai government.

The decline was partly due to the ongoing trade war between China and the US, explained Liu Jiaming, a researcher with the Institute of Geographic Sciences and Natural Resources Research, Chinese Academy of Sciences.

China’s mobile payment service provider Alipay said that the per capita consumption of Chinese tourists on its platform saw an increase of 30 percent during the holiday.

However, a noticeable shift happened this year that more and more Chinese tourists tended to spend their money on in-depth travel experiences rather than shopping.

A tourist named Ye Qiu who went to France during the vacation said that the in-depth travel experiences, which allowed him to explore the exotic world, were of more significance for him than shopping.

Jiang Yiyi, director of the Institute of International Tourism Development under China Tourism Academy, noted that such shift showcased the upgrading of Chinese tourism. 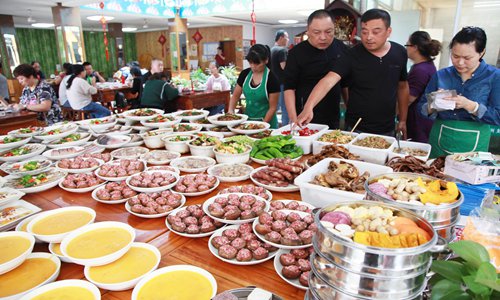 During the weeklong holidays to celebrate the National Day, domestic tourism generated 599.08 billion yuan ($87.18 billion) in revenue, up 9.04 percent year-on-year, according to media reports on Monday.

Retail and food services spending in China amounted to 1.4 trillion yuan during the holidays, up 9.5 percent year-on-year, data from the Ministry of Commerce showed on Sunday.

Experts said the National Day spending binge, especially on services such as travel, provides support for dealing with difficult external factors such as the China-US trade war.

Zhou Xiaochuan, former governor of the People’s Bank of China (PBC), China’s central bank, has said that the trade war could cut growth in the Chinese economy, but probably by less than 0.5 percent.

Based on China’s 2017 GDP data, 0.5 percent would amount to 413.56 billion yuan. That means the 9.04 percent increase in tourism revenue during this year’s National Day holidays, or 49.67 billion yuan, could offset some of the effects caused by the trade war, according to Global Times calculations.

Li Jun, a services trade expert with the Chinese Academy of International Trade and Economic Cooperation, said the strong services sector consumption during the National Day holidays is a further demonstration of China’s resilience to external factors.

“China’s super-size market means it has more room for adjustments to cope with external effects. And the holiday spending binge is further proof that China should get through dangerous waters by focusing on raising domestic demand and improving consumption,” Li told the Global Times on Monday.

Domestic tourism also boosts the Chinese economy in many sectors beyond retail and catering.

According to State-owned railway operator China Railway Corp, 130 million passenger trips were made during the period from September 28 to Sunday, up 10.8 percent from the comparable period last year.

And a total of 44 high-speed railway lines broke their single-day record for the number of passengers handled.

Yang Yong, dean with the School of Tourism at East China Normal University, told the Global Times on Monday that tourism can boost the real economy, especially as more Chinese people devote time and resources to travel.

“One feature of this holiday is the fact that many sites chose to lower their ticket admission fees, which shows tourism asset owners are beginning to realize the huge spillover effect tourism has on the local economy,” Yang said.

The Economic Information newspaper reported on Monday that more government policies to boost consumption will be implemented during the fourth quarter this year.

Experts said that the benefits from this will provide further support for handling the trade war.

For instance, due to the domestic lack of high-end services in medical care, education and travel, Chinese people often spend their money on such services overseas and foreign economies get the spillover benefits, experts noted.

“The government is planning to channel some of this spending back home by deepening China’s opening-up and attracting high-end service providers to set up shop in China. This way, the domestic economy can get the spillover benefits,” Li said.

Overseas travel is still gaining in popularity. During the holidays, Chinese tourists visited nearly 100 foreign countries and regions, according to a statement sent to the Global Times by online travel agency Ctrip.

Tourists spend an average of 8,000-9,000 yuan per capita on such trips and Thailand and Japan remained the favorite destinations for Chinese tourists. However, the popularity of the US as a destination dropped from last year’s 5th spot to 10th, according to Ctrip. An employee works on an electric bus at BYD’s factory in Lancaster, California on Sunday. Photo: Ding Gang/GT

The unemployment rate of Lancaster, California has fallen from 24 percent to 4 percent since construction of a factory for Chinese electric vehicle maker BYD started there in 2013, said Lancaster Mayor R. Rex Parris Saturday.

BYD has become a model and its arrival prompted more investment in the city. Parris made the remarks during a visit by a Chinese media  delegation to the city.

The mayor said that to facilitate BYD’s investment, he helped the company find factory builders, canceled all administrative fees, and eased administrative obstacles. Even Wang Chuanfu, CEO and president of BYD, joked that Parris was “insane” during a phone call between the two.

Indeed, Parris is not “insane,” and what he has done was based on his 10 years of experience as the mayor. He knows what the citizens really want and what it means to be in power. He said that he worked like a mayor of China, bringing the parties together and reaching an agreement through prompt consultations and negotiations.

The BYD factory in Lancaster, which was completed in 2017, is the largest electric bus plant in North America, helping BYD obtain top technology, market share and sales in the field of electric bus manufacturing in the region.

With an annual production of 1,500 electric buses, the plant sells its products to a wide range of customers in more than 30 states, including Stanford University and Facebook.

BYD has grown into a leading manufacturer of electric buses from a small company that sold cellphone batteries when it entered the US in 1999.

BYD is the world’s largest manufacturer of electric cars. The factory in Lancaster has created nearly 1,000 jobs for the town of 160,000 inhabitants.

Though Lancaster is home to factories of renowned firms such as Boeing and Space X, BYD has become a new choice for locals thanks to the long-term and stable jobs it offers. Since the arrival of BYD, the crime rate of the city has dropped by 40 percent.

The mayor told the media delegation that one day, a stranger came up and shook hands with him. “Thank you for supporting BYD to build its factory here!” the man said. “I have a job. My two children also have jobs. One of them bought his first house.”

Parris noted that BYD has set a prime example of cooperation between countries with different cultural backgrounds.

He also expressed concerns over the possible negative impact on the cooperation that may be caused by Washington’s policies.

But he still looks on the bright side of China-US cooperation, saying confrontation will only lead to mutual losses.