How will China give full play to its advantages in space technology, better serve the society and the people, and become competitive in global space industry?

The establishment of more and more such space startups has directed increasing investment to the space industry, said Tan Kaijia, a professor with the National Defense University of the People’s Liberation Army.

The gradual maturing of technologies in rocket launch, satellite manufacturing, remote sensing and communications, as well as their expansion for civilian use, has opened up the space economy and attracted multiple investors, Tan said.

He also said that the service prices will be lowered as the market opens wider and more players take part in the game, which also means lowered threshold for the area.

“The government-guided space industry will eventually be accessible to everyone, and more business opportunities will be created,” he explained.

For instance, the country’s southern Hainan province says it will send 10 commercial satellites into space in the next four to five years. The satellites will feature a higher degree of coverage, medium resolution, low cost, and wider application, and will be used for agriculture and forestry monitoring.

The application in more areas needs to be improved, including traffic and transportation navigation, and disaster prevention and relief. Satellites with larger capacity and a higher degree of coverage and safety are needed to be developed, Tan disclosed.

The global space economy will grow to the scale of a few trillions of US dollars, Goldman Sachs predicts. For China, about 800 billion yuan ($125 billion) market aggregate will be seen in carrier rockets and satellite application from 2016 to 2020.

Analysts said the country needs to foster a world-known brand in space technology to raise its soft power in the field.

They are also calling for laws and regulations in the space sector which include the commercial industry to promote healthy and rapid development. Beijing will accelerate its preparations for the 2022 Winter Olympics, with construction of the competition venues planned to be finished by the end of 2019, Beijing authorities said during the municipal parliamentary session, China News reported on Monday.

Zhang Jiandong, deputy mayor of Beijing, said that the construction of all the 26 venues will be stepped up this year in order to achieve that goal.

The government work report said Beijing will use concerted efforts to prepare for the 2022 Winter Olympics. The Beijing government has mobilized medical workers for a simulated emergency rescue to ensure that participants in the event have a safe experience.

As part of the transportation network, the expressways connecting the venues are under construction, which will shorten travel time between different venues.

Beijing hosted the Summer Olympic Games in 2008. In 2015, it won the bid to co-host the 2022 Winter Olympics with Zhangjiakou.

A Memorandum of Understanding was signed between China Railway Corporation (CR) and the Hong Kong Special Administrative Region (HKSAR) government, to arrange the key work during the trial operation of the Hong Kong section of the Guangzhou-Shenzhen-Hong Kong Express Rail Link (XRL), cctv.com reported on Jan. 29.

According to the agreement, at the early stage of operation, 127 pairs of trains will run on the section of the rail every day, among which 13 pairs will directly reach Beijing, Shanghai, Kunming, Guilin, Guiyang, Shijiazhuang, Zhengzhou, and other cities on the Chinese mainland.

The agreement was signed by HKSAR’s Secretary for Transport and Housing Chan Fan and CR’s Director of the General Office Han Jiangping. HKSAR Chief Executive Lam Cheng Yuet-ngor and the General Manager of CR Lu Dongfu witnessed the signing ceremony.

Lam said the agreement marks that the two parties have reached consensus in principle on financial and operational matters, laying a sound foundation for the operation of the Hong Kong section of the XRL in the third quarter this year.

Lu said as an important part of the national high-speed railway network, the connection of the XRL to the high-speed rail network of the Chinese mainland is a result of the Central Government’s support for Hong Kong’s prosperity and development.

Two students are on their way to sit the civil servant recruitment exam in Taiyuan.

China’s civil servant recruitment remains competitive despite some cases of people quitting their secure jobs due to limited salary and room for promotion, says expert, suggesting that the salary system be improved to guarantee the civil servant team, China Economic Weekly reported.

Statistics by the State Administration of Civil Service show that 1.66 million participants in China’s 2018 civil servant recruitment exam applied for more than 28,000 vacancies in 120 central departments and agencies, up 173,400 than the previous year.

The number of people who registered for the vacancies in the national public service system has exceeded one million for 10 consecutive years since 2009.

However, in recent years, some 0.015 percent of civil servants in the country chose to quit their jobs to establish their own business or seek for higher-paying jobs.

Although the rate is low for the over 7 million civil servants in China, experts say it is necessary to improve the salary system to guarantee the country’s civil servant team.

The salary for civil servants, especially those at the grass-roots level, should be improved with the country’s GDP growth, said Zhu Lijia, a professor at the Chinese Academy of Governance, adding that a complete system should be established to ensure the salary growth on a reasonable basis.

Online Chinese teaching is expected to become one of the most popular occupations in 2018, as Mandarin fever has been sweeping across the world in recent years, says an authoritative department, China News reported on Jan. 29.

China’s Ministry of Education has said that over 5 million Chinese teachers are needed in the world, and the figure will continue to grow with rising number of Mandarin learners.

Statistics show that in Australia the number of Mandarin speakers now ranks second behind those speaking English; and in Russia, the figure has increased to 56,000 in 2017.

Currently, it has over 4,000 registered students, covering more than 40 countries including the U.S., Canada, and Egypt. Nearly 6,000 people have applied for the post of Chinese teacher on the platform.

Nuclear pressure equipment, a key one of the International Thermonuclear Experimental Reactor (ITER) project, has been produced by a Chinese enterprise and shipped to France, according to China General Nuclear Power Corporation (CGN) on Jan. 28, Xinhuanet.com reported.

The equipment, used in nuclear fusion, is the first of its kind successfully developed by China. The four steam traps, also known as “VST,” have passed a series of acceptance tests.

Gao Feng, a vice director with the enterprise disclosed that the delivery cycle of the equipment is only 15 months, half that of the same type of nuclear power equipment.

ITER, currently under construction in southern France with an investment of 15 billion Euros, is a 10-year-old international project aimed at exploring the commercial use of fusion power, the same energy source that our Sun uses to light and warm Earth.

Photos taken show the snow scenery in central and eastern China, regions which have been hit by snowfalls these days, Xinhuanet.com reported on Jan. 28. 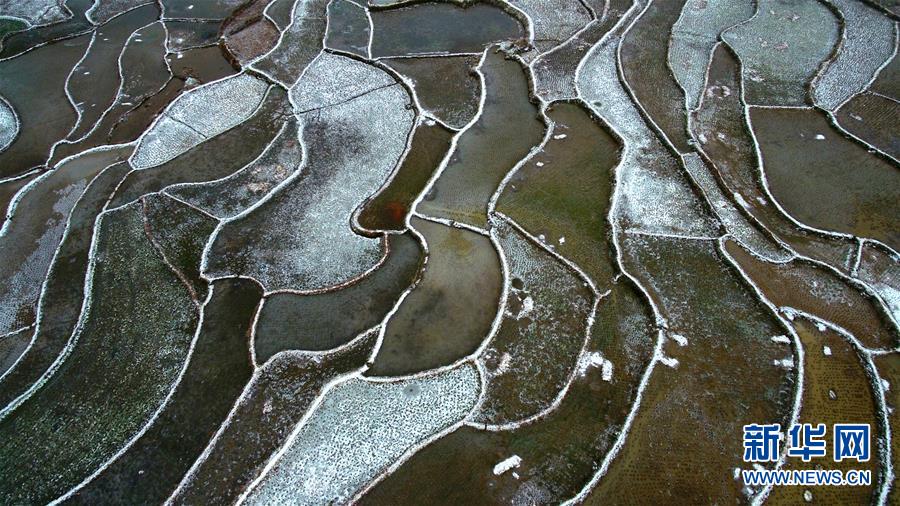 With Spring Festival drawing near, restaurants in China have almost been booked up for the New Year’s Eve dinner. Some catering companies even require extra charges if dining time exceeds a time limit. A manager surnamed Xia at a star-grade hotel in Chengdu, southwest China’s Sichuan Province, disclosed that the restaurant is fully booked for dinner on New Year’s Eve, and even for dinners on weekends ahead of the Spring Festival.

Some hotels even set 1.5-hour dining time for customers, and will charge 100 yuan ($15.8) per hour in extra fees if they exceed it.

Zheng Fengsheng, a lawyer at a Sichuan-based law firm, said that setting a time limit on dining violates consumers’ right of free choice and the contract law.

Although the act is understandable during the legal holiday, the time limit must be set within a reasonable range, said Zhang Wei, an official from the city’s consumers’ association.

The technical plan was reviewed by 19 academicians and experts. After queries and discussion, the reviewing team affirmed the plan and approved it unanimously.

The project is one of 18 national key research and development plans set by the country’s Ministry of Science and Technology in 2016.

A 600 km/h magnetic levitation system and its engineering application are still a whole new area for China.

Experts believe that such a system is a perfect complement to high-speed rail, which runs at 350 km/h; civil aircraft fly between 800 and 1,000 km/h.

According to the plan, the first Chinese-made high-speed maglev sample train will roll off the production line in 2020 and complete a 5-kilometer test run.

Another Chinese “comfort woman,” who were forced into sexual slavery by the Imperial Japanese Army before and during World War II, passed away at the age of 90 on Jan. 23, reducing the total number of surviving “comfort women” in China to 14, Beijing Youth Daily reported Friday.

The woman, named Li Ailian, was captured twice by the Japanese army in her hometown Wuxiang, north China’s Shanxi province, in 1945 when she was only 17 years old. She had been locked up for 10 days until the Japanese retreated.

Social organizations and volunteers visited Li’s family and offered their condolences, and people mourned on the internet after hearing the news of her death.

Li was once featured in the documentary film “Twenty-Two,” which was named after the number of “comfort women” alive at the time of its filming in 2014. As one of the 22 victims, Li shared her misery on the big screens across China.

Now, only seven of the women in the movie are still surviving.

At first, she was reluctant to film the movie, because of the pain of her memory. It was the understanding and encouragement of her family that contributed to her acceptance.

“I told her it was not her fault and she would be a witness of history,” said Li’s daughter-in-law Li Xiuping.

The film achieved unprecedented success as a documentary, with a box office of 170 million RMB. More importantly, more people have been paying attention to this very special group ever since.

Now only 14 “comfort women” are surviving in China. Professor Su Zhiliang with Shanghai Normal University said that to show more care for them is the most important thing we can do before the figure drops to zero.