Wang Jianlin, chairman of China’s property and entertainment giant Dalian Wanda Group, recently acknowledged that there is a property market bubble in China, but argued that the industry won’t collapse.

Wang said China’s real estate investment growth shot up in October to its highest point since April 2014, indicating that property developers have yet to feel any notable pressure from recent measures intended to curb speculative housing purchases.

Most of the Chinese population living in rural areas would like to move to cities, which is indicative of significant potential for urbanization, according to Wang.

Wang said Dalian Wanda Group hopes to own 20 percent of all cinemas in the world within 10 years, but did not give details on how he plans to achieve that.

Last month, Zhou Xiuyun, a mute mother in Shandong province, raised money for her son’s tuition by holding up a sign in the street. On Nov. 29, she once again held up a sign – this time to show her gratitude after many kind people offered donations.

Zhou is a 48-year-old woman with congenital hearing loss living in Yangxin County, Shandong province. Since her husband died of lung cancer, she and her son have had a hard time supporting themselves, let alone paying off her husband’s debt, totaling more than 100,000 RMB. 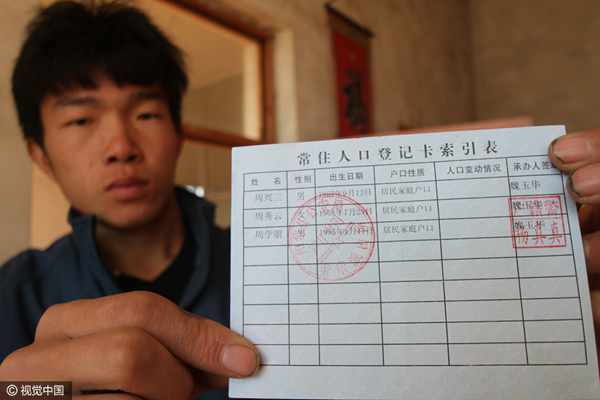 In order to keep her son in college, Zhou took to the streets on Oct. 31 with a sign saying “My son wants to go back to school.” As a result, many people and even companies got involved in raising money for Zhou’s son. The manager of a start-up decided to help Zhou that very night. Soon after, two companies in Shandong decided to provide Zhou’s son with a work-study position, as well as an allowance worth 50,000 RMB for tuition and a free course for the boy to get his driver’s license. Two foundations offered to provide him with 5,000 RMB per year for his studies. In total, Zhou and her son have received 88,230 RMB. On Nov. 29, at a special wedding held in Hangzhou, Zhejiang province, the bride and groom were wed in a swimming pool, accompanied by all the wedding’s guests. The food at the wedding banquet, as well as the couple’s wedding rings, were all made of pumpkin. By planning such an unusual event, the couple hoped to promote healthier wedding ceremonies. The Sculpture in Shanghai

Recently, a sculpture placed on the banks of the Huangpu River in Shanghai was taken to task for its uncanny resemblance to a London landmark, “Timepiece.” The artist of “Timepiece” has accused the creator of the Shanghai installation of stealing her design. The sculpture in Shanghai, which credits no artist and gives no information about its production, does seem identical to the work in London, created by British artist Wendy Taylor. Shanghai is scrupulous about intellectual property protection, said the local government, adding that the sculpture will be removed if plagiarism is confirmed. A thesis on how smog affects the human body has recently caused a major stir in China. One of the co-authors, Joseph J. Larson, with the Centre for Antibiotic Resistance Research at University of Gothenburg in Sweden, clarified that the thesis has been widely misinterpreted.

The report, titled “The structure and diversity of human, animal and environmental resistomes,” was published in the journal Microbiome in November. In the report, the research team states that they tested a huge number of antibiotic-resistant genes in 14 air samples collected on a polluted day in Beijing.

On Nov. 23, an article titled “The painful breath! Drug-resistant bacteria found in smog in Beijing and other places in China” went viral on WeChat. The article stated that urban air pollution is even deadlier than previously assumed, because it contains drug-resistant bacteria. Asserting that it is difficult to predict how cities with serious air pollution would suffer, the article left many Chinese people in a panic.

Larson told People’s Daily that he has been receiving phone calls and emails from Chinese media since Nov. 24. He feels obliged to provide a clearer explanation to the Chinese people so as to stem the spread of distorted reports.

Larson further explained that the sample size for the study was small, and requires expansion before concrete conclusions can be drawn. He encouraged the media to use more caution when reporting academic news in the future. 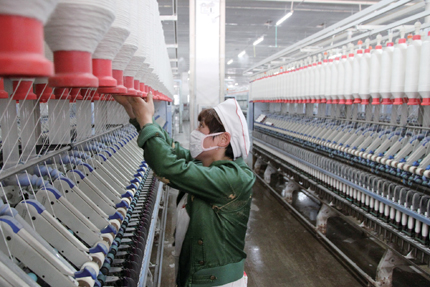 Experts said at a recent seminar that China has become the biggest textile exporter in the world, and will likely maintain this position for at least the next decade.

Joseph Wozniak, head of Trade for Sustainable Development at the International Trade Centre (ITC), said at a high-level forum about sustainable China-EU supply chains that China’s exportation of textile products to global markets has increased eight-fold since it joined the WTO. Jiang Hui, chairman of China Chamber of Commerce for Import and Export of Textile and Apparel (CCCT), added that China would likely remain the world’s biggest textile exporter in the next decade.

China has the largest textile industry in the world, with the most complete industrial chain and the most diverse categories. Textiles constitute an important part of bilateral trade between China and the EU.

Jiang used data to prove that China’s textile and apparel trade is increasing in quantity but decreasing in terms of price. He also mentioned that although external demand is robust at this moment, the market share lacks momentum. He added that the industry also faces challenges posed by slow transformation and overlapping production capacity. Moreover, the products are mainly in the middle to lower ranges of the value chain.

Jiang believes that momentum for the textile industry lies in improved quality, industrial innovation and an Internet-based mindset. Beijing West Railway Station recently adopted facial recognition technology to facilitate faster check-ins before the coming Chinese New year travel rush. The entrance equipped with the new technology is located on the first floor of the north building. The station said staff and customers are still adjusting to the change, and more facial recognition scan stations will be installed in the future. In order to successfully check in using the technology, passengers must not wear masks or sunglasses.

Local governments have recently been stepping up their supervision over liquor bans applied to civil servants. From banning any drinking during work hours to prohibiting alcohol at official receptions, China is increasingly cracking down on alcohol consumption among government employees. A total of 30 alcohol violations have so far been reported by disciplinary inspection departments across the country this year.

In September 2016, northwestern China’s Xinjiang Uyghur Autonomous Region implemented an alcohol ban for civil servants at official receptions. According to the ban, civil servants in the region are banned from drinking alcohol at all official events, including dinners, no matter what individual or institution offers the drink.

Civil servants face fines and can be even dismissed from their positions if they consume alcoholic beverages during work hours, according to relevant regulations.

Most civil servants support the regulations. A town party chief in Jilin province said he feels relieved by the ban, which not only saves a lot of time spent dining, but also protects him from alcohol-related harm.

However, violations still exist. Some civil servants choose to drink alcohol in private places such as rural inns, and some drink after work or buy liquor with their own money. Song Xuelan, a 92-year-old grandmother and recent Internet sensation, believes that her street snack business has helped to extend her life.

Song has been selling zongzi, a kind of rice dumpling, in Qingdao, Shandong province for more than 20 years. At 7 a.m. each morning, Song sets up her stand on Laiwu Street, with help from her youngest son. In the afternoon, she makes zongzi at home. Song’s two elder sons are retired, and the youngest is unemployed.

Ever since Song went viral online, she has been selling 100 dumplings an hour, compared with 50 previously. Song receives a monthly pension of 1,000 RMB ($145 ), along with her zongzi income.

“I can support myself with my own hands, so there’s no need to bother others,” Song said.

Apart from some hearing loss and the occasional backache, Song remains in good health.