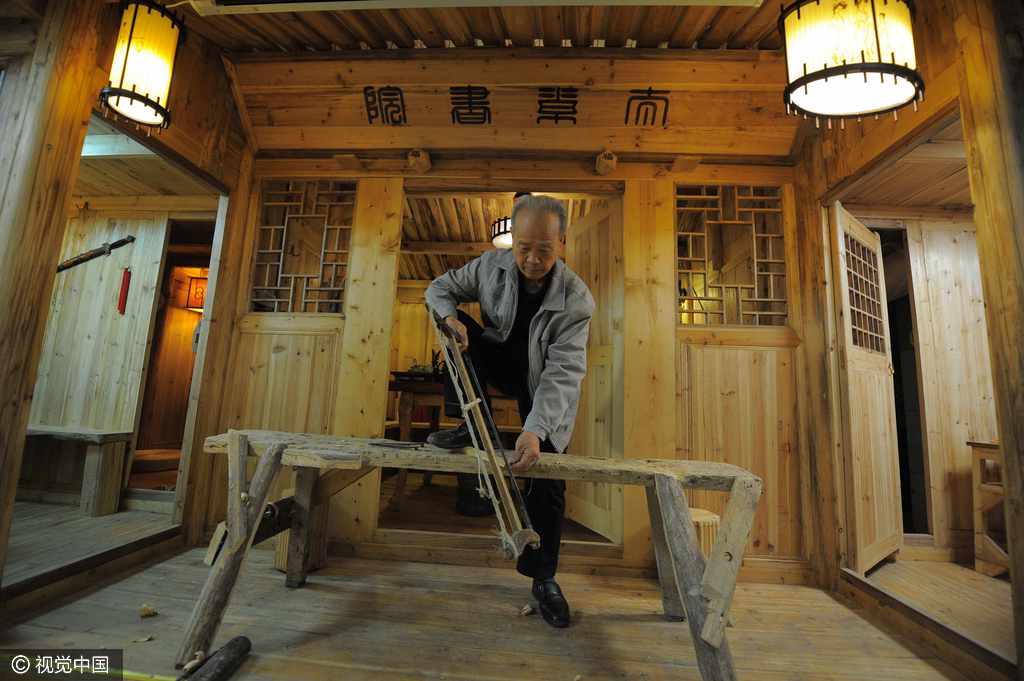 Peng Zhejun, a 73-year-old carpenter, built a cabin in Guiyang, Guizhou province whose main structure is almost entirely free of nails. Peng polishes the interior whenever he finds something unsatisfactory. Li Chaohui, a father in Hunan province, saved the life of a young man who wanted to commit suicide, only to learn of his own son’s suicide hours later.

Li’s son, Xiaowei, had been missing for several days. His family later learned that he had suicidal thoughts related to his physical appearance and academic performance.

“I should have all wonderful things. While destiny is hard to alter, I have destroyed them all. I hate to be ordinary but I can do nothing,” Xiaowei wrote on social media. Li, worried about his son’s mental health and disappearance, discovered that Xiaowei was a member of an online chat group in which all the members discussed detailed plans for committing suicide. Li, changing his QQ name to “rather to die,” pretended to be a 21-year-old girl with depression. He joined the conversation and attempted to gain the trust of other participants, hoping to discover the whereabouts of his son.

While chatting with the group, Li discovered that another boy named Ashui also planned to commit suicide. Li was ultimately able to save the boy with the help of police, but he failed to find his own son.

Sadly, a few hours later, Li was informed by police that Xiaowei had jumped to his death from a building in Changsha nearly a week before.

Ashui told police that he has given up the idea of suicide and will try to live the best life he can after hearing of Xiaowei’s death.

Several gym fanatics who are retiring from the local fire department in Ningbo, Zhejiang province took photos on Nov. 29 in memory of their time with the department. 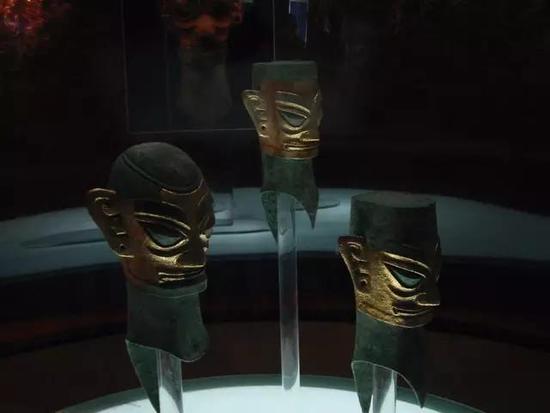 The culture of Sanxingdui, an archaeological site in China’s Sichuan province, will be the subject of an animated movie titled “The Golden Mask,” according to a promotional event held on Nov. 28 in Chengdu, capital of Sichuan.

Targeting an international market, the animation introduces the history of Sanxingdui.

“The Golden Mask” also features fantasy, adventure and time travel. The animation will be created using 3-D digital technology in accordance with IMAX standards. Its worldwide roll-out is expected to occur in 2019.

Located in Sichuan’s Guanghan, Sanxingdui has a history of between 3,000 and 5,000 years. Some people believe aliens might be behind the mysterious relics, since a number of bronze statues with alien appearances have been spotted at the site. It is hailed as one of the 20 greatest archaeological discoveries of the 20th century.

China’s domestically developed anti-HIV drug has entered Phase 3 clinical trials, a last step prior to official approval. Once approved, the drug, Albuvirtide, is expected to be the world’s first long-acting injection for HIV treatment.

Long-acting injections have been a growing trend in recent years. They not only offer patients an alternative to traditional treatments, they are also more clinically effective than oral tablets, as they stop the virus from getting into target cells at an early stage.

Currently, no long-acting anti-HIV drug has been approved anywhere in the world, said an employee with the clinical team of the National Health Development Planning Commission.

Cuban revolutionary leader Fidel Castro passed away on November 25. People from around the world offered condolences forhisloss, paying tribute to his legendary life and immortalspirit.

Over the past half century, Castro has been regarded as a symbol that represented the pursuit of justice.

“He has devoted all his life to the Cuban people’s great cause of struggling for national liberation, safeguarding state sovereignty and building socialism,” Chinese President Xi Jinping said in his message of condolence to his Cuban counterpart Raul Castro.

“He has made immortal historic contributions to the Cuban people and to the world socialism development,” Xi added. Calling Castro “a great figure of our times,” he said that Comrade Castro will be remembered by history and by the people as well.

UNSecretary-GeneralBanKi-moon, inastatement, lauded Castro’s contribution, saying that “he was a strong voice for social justice in global discussions at the UN General Assembly and international and regional forums.”

Over the past 60 years, Castro hasfought for revolution, socialism development, national independence, as well as world justice both inCuba and theworld arena. Speaking of Cuba’s attitude toward the US, Castro said that “Cuba will never kneel down to the US with its people unified together.”

Cuba is not opposed to finding a solution to its historical differences with the US, but no one should expect Cuba to change its position or yield to its principles. Cuba is and will continue to be socialist, he stressed.

The loss of such a legend also drives the world to review history and explore the future. Since equity and justice are always required to realize human development, each nation should strive for these two goals for the sake of civilization of the mankind in each era. However, people have to admit that not all humans are enjoying equity and justice so far.

It’s natural for every country to seek for sovereign equality and its own independent development, but challenges and obstacles still hinder this process. As some countries never give up the ambition and attempt to monopolize international affairs in the global system, there is still a long way to go before the final democratization of international relations.

In terms of human development, the widening gap between the rich and the poor tests theworld. About 800 million people are living in extreme poverty, 6 million children under the age of 5 die every year, and nearly 60 million children are left uneducated.

Against those harsh facts, people have to reconsider the global development vision and approach, lay more focus on equity and justice and pursue a more inclusive and mutually beneficial economic globalization process. The world should never stop its exploration of the development path.

Let u sremembe rCastro’s call at the closing of the 7th Cuban Communist Party National Congress several months ago. “We will change what needs to be reformed in the country while maintaining our loyalty and unity just like our independence heroes Marti, Maceo and Gomez,” the veteran leader declared hisresolution.

The spirit of Fidel Castro lives for eternity. Today, the world is also learning from his wisdom for a better future while mourning over the death of this great fighter.

Li delivered his message to senior officials from 11 provinces and cities at a meeting about simplifying administrative procedures and delegating power. The meeting took place on Nov. 21 in Shanghai.

Li’s remarks came after two popular but unlicensed shops in Shanghai had been shut down since August 2015. One was 34-year-old A Da Scallion Pancake Shop, and the other was a 20-year-old family wonton shop on Menghua Street. The scallion pancake shop gained a large following after it was featured in a BBC news story. The shutdown of the two shops caused a major stir in China.

Now, Li has asked relevant departments to reflect on how to stimulate the market by creating a friendly environment for innovation and entrepreneurship.

The premier has lately been focused on small businesses in China. On April 25, he made a visit to Width Alley in Chengdu, Sichuan province, where he bought several souvenirs and books and introduced a foreign visitor to Tsingtao beer.

Yang Liwei, the first person sent into space by the Chinese space program, recently described his experience in space, mentioning strange noises he heard during his mission.

Yang tried to take notice of every single detail from his voyage. He said he saw a very bright light shining for a split second during the short night in space, but when he tried to find its source, the light quickly disappeared. Nothing appeared amiss with the dashboard in the space lab.

Another strange phenomenon Yang encountered was randomly-occurring knocking noises, which didn’t last for long and followed no discernible pattern. According to Yang, the knocking didn’t sound like it was coming from inside the spacecraft, but rather like someone was knocking at the exterior with a wooden hammer.

Scientists tried to recreate the sound after Yang returned to Earth, but the efforts never succeeded. Nevertheless, he reassured astronauts who came after him that there was no need to panic if they came across similar phenomena.

The work of astronauts is full of difficulties and hardship, testing the mental and physical strength of the pioneers. The experience and skills accumulated in Chinese space science come only thanks to hard work done by earlier generations of astronauts.

Jenny Lang Ping, head coach of the Chinese women’s volleyball team, said in an interview that she plans to keep coaching the Chinese team as long as she continues her coaching career. She also acknowledged that she has declined several offers to coach for foreign teams.

Lang, who guided her team to victory during the 2016 Rio Olympics, gave her comments in a CCTV documentary on Nov. 28.

“I am aging, and my daughter has a job. We do not have any major pressures, so I will either continue coaching the Chinese women’s volleyball team or end my career,” said Lang.

Some speculate that the beloved figure’s vague answer indicates that she will continue coaching the Chinese women’s volleyball team once her injured knee recuperates.

Lang also disclosed that on her second day back in Beijing after the Rio Games, several foreign teams, including the Italian team, offered her large sums of money to coach for them, but she refused these offers without hesitation.

After this year’s Olympics, Lang decided to take a long vacation before signing a possible contract extension. She plans to spend time with her family and receive treatment for her injury.

After four months of excavation in the city of Huanghua, the ruins of an ancient hearth, fire pits and walls have been uncovered among bricks, tiles and broken porcelain. The findings show that there was heavy human activity around the site, which indicates that the ancient town likely had a prosperous economy, according to Lei Jianhong, head of the provincial archaeological research center in Hebei province.

Haifeng, the town in Huanghua where the ruins are located, is thought to have been a port for trade. The discovery of the ancient ruins may reveal new clues to the town’s past, and provide more evidence for research on the town’s role in the Maritime Silk Road, according to experts.