Nineteen years after the September 11 attacks, Time magazine is once again using black as its cover. 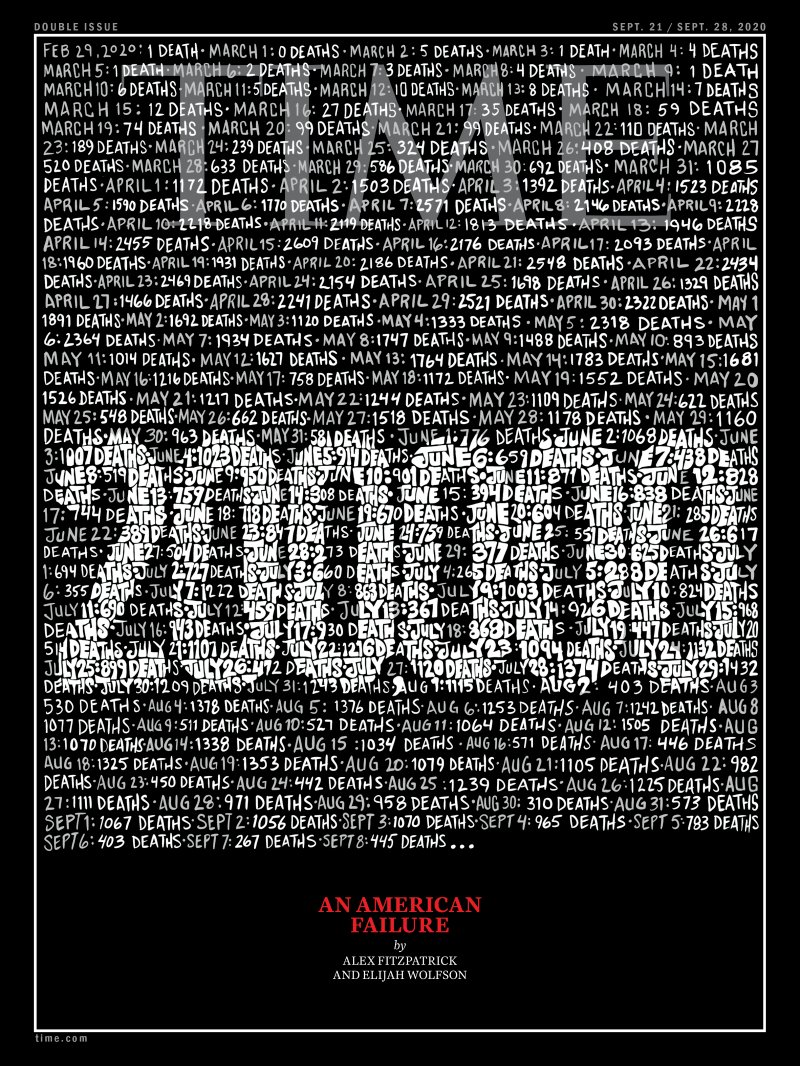 Written across the cover themed “An American Failure,” are the number of daily deaths from COVID-19 in the U.S. over the course of 193 days from the first death of the country on Feb. 29 to Sept. 8. Currently, the number has reached 200,000.

Eight months have passed since the first confirmed case of COVID-19 in the U.S. on Jan. 20. During this period, the number of infected persons increased from 1 to more than 6.8 million, with the death toll crossing the threshold from 100,000 now to 200,000.

The U.S. media attributes this to the “failure of a nation:” a failure of political leadership at all levels, and a distrust of scientists, the media, and most experts in general, along with deeply ingrained cultural attitudes regarding individuality and the “values placed on life.”

For more than eight months, these judgments have been confirmed.

At the beginning of the outbreak, American politicians proclaimed that “this is no different from the flu,” and there was a lack of testing and tracking of close contacts and an encouragement for states to reopen as soon as possible; scientists’ voices were suppressed.

Some lawmakers and corporate executives acted swiftly — but instead of preventing impending disaster, they profited from it.

Bob Woodward, a prominent American investigative journalist, reveals in a new book, Rage, that while Donald Trump downplayed the dangers of the coronavirus last winter, he knew full well how dangerous, fast-spreading and deadly the illness actually could be. The book clarifies just how much Trump knew about the disease long before the first recorded U.S. death.

The chaos caused by a lack of leadership has thrown America’s epidemic prevention into disarray. George Packer, a staff writer for the Atlantic, wrote: Every morning in the endless month of March, Americans woke up to find themselves citizens of a failed state. With no national plan — no coherent instructions at all — families, schools, and offices were left to decide on their own whether to shut down and take shelter. When test kits, masks, gowns, and ventilators were found to be in desperately short supply, governors pleaded for them from the White House, which stalled, then called on private enterprise, which couldn’t deliver. States and cities were forced into bidding wars that left them prey to price gouging and corporate profiteering. Civilians took out their sewing machines to try to keep ill-equipped hospital workers healthy and their patients alive. The United Nations sent humanitarian aid to the world’s richest power — a beggar nation in utter chaos.

According to an Associated Press poll released Sept.20, the approval rating for the U.S. government’s response to the outbreak was 39 percent. Over the past eight months, the White House has not changed its approach to the epidemic: being inactive at home and active abroad; what has changed is the ever-growing death toll.

But they are not merely numbers. They are lives lost. They were older people without protection, children whose lives had not yet begun, young people with ambitions for the future… More often, they are African-Americans and other ethnic minorities who hoped to embrace the American Dream.

When lives are gone, where do dreams lie?

Human life is the most precious. The right to life and the right to health are the first human rights. Will the loss of 200,000 lives serve as a wake-up call to those in power who have a “disregard for life?”